I met Michel Condeminas at Montgiscard. I had been riding for at least two locks with Maxime, a lively and sociable local kid. Maxime had caught up with me on his mountain bike to ask me lots of questions about the recumbent bike, my destination, bike trips or life in general, and in turn told me about the bike touring trip to Brittany with his class last year. We had just agreed to say that the trips in group are good but when there are too many people it’s boring because we always have to wait for those who hang out, we were there when we fell on Condeminas. I say like that because back in those days men called each other by their last name, and that’s how he introduced himself at first. “Condeminas.” (A moment, and seeing that I’m waiting for the rest) “Michel Condeminas. It’s Catalan.”

At 80 years old, Michel continues to make beautiful bike rides. He is a former motorcycle mechanic, he assembled himself his recumbent tricycle on the basis of a Taiwanese frame bought through a Hungarian importer. It sounds complicated like that, but in his time the man was specialized in importing English motorcycle parts. His bike is rather messy, the concern is not aesthetic but functional: it is him who assembled everything, including the 2500 watts of electric assistance. I tell him about my trip. When I mention the Pyrenees, he tells me with a certain talent his escapade in the frozen passes of the Pas de la Casa - “…and the brake calipers were caught in blocks of ice this big, I put my feet to brake as I could! It was a different time” - eyes a little hazy as after 80 beautiful years of life.

But Condeminas doesn’t linger and tells us about the comparative advantages of English and Japanese bikes. His preference goes to the first without hesitation, but the words are those of a professional, expert and measured. No idolatry, but rather a fine knowledge of two very different mechanical approaches. During a moment of silence (Michel is the elder and he leads the conversation, we, the kids, listen) Maxime explains that he wants to be a motorcycle mechanic too. He owns motorcycles since he was a child, and even if he is not yet old enough, he does not deprive himself of taking the 65 cubic centimeters out of the garage and to make some tours in the village. The kid is convinced and convincing, and judging by Michel’s newfound attention and modestly emotional smile, I sense that the moment is important. A lot passes in a long moment punctuated by short sentences. Words like passion, profession or generation cross my mind, but instead of coming out with something distressing I take advantage of this moment when I disappear a little to take a picture of them side by side. Direct glances, confident smiles.

Michel Condeminas then continued his way in the other direction to go and feed the geese that wait for him daily towards Negra (it’s crazy the visual acuity of these animals, he tells me, they cackle from far away when he approaches). Maxime decided that he was a bit far from his sector and turned around quickly, wishing me a good trip with enthusiasm but without ceremony. As for me, I enjoyed all this for a few more locks, alone on my recumbent bike, with a smile on my face and a light heart. 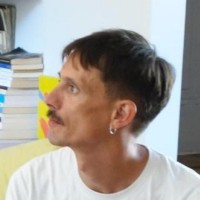 Developer for the open science in archaeology